My Exciting 2019 project…..Building an Otter Holt!

Following the success of our badger sett build at Yew View some years ago now, I have been keen to build something to try to attract the local otters. I have been filming the otters at the bottom of the site, on the Severn,  for almost 5 years and I have seen a selection of individuals, including several males and females and cubs. There is a basic artificial holt at this filming spot, although it is very close to the water level, so floods regularly. We are not sure what it consists of, but it has been used as a day holt in the past. We have males and females visiting this part of the bank just about every week to spraint.

I have spent a lot of time researching different otter holt designs. I have contacted various organisations and individuals who have built holts and looked at lots of images and videos. Gathering all this information together, I designed my own holt / den space for Yew View. It is always hard when it comes to the design of such as space as I found I got lots of different advice. What I did know is that otters will holt in all sorts of different places and, like most wildlife, there is no formula that will guarantee success. I have seen otters holt in badgers setts, holes at the bases of trees, in sheds, outbuildings and even under a pile of old pallets!

In the end, you have to take on board all the information and advice you have been given and create something that suits your location and your individuals. I have gone with a ‘gut’ instinct based on what I feel these otters might be interested in. This space would be suitable for other species as well, I feel.

The River Severn can flood a couple of times a year on the site and the levels can be pretty volatile. The otters deal with that regularly in this location and will have a selection of holts in which to lay up in during the day. I am hoping to create such a space. A breeding holt would just be a dream come true, but for now, I would be delighted if an otter chose my holt to sleep in.

I decided to build two chambers. One is a couple of metres above the general water level, allowing some rise before flood. The second chamber is another metre higher. I have designed the whole set-up to cope with flood. Each chamber base is on a slight slope, with a drain. The chambers are connected via drainage tubes and exit at top and bottom.

The cameras will be mounted down pipes (as in my badger sett) so they can be easily removed for maintenance and if the river rises!

The pictures below show the process we went through to construct. Ed Gilder, who runs a local company who have done fencing and concrete work at Yew View before, did the major build elements as my skills do not extend to diggers and brickwork, sadly! Ed and I had met up a few months ago to talk through all my plans and to decide how we were going to go about it! He then had me on the sidelines, like an annoying backseat driver!!

How did we build it?

The pictures below show the stages we have been through so far, to get this space created…

First, I had to decide on location. I decided to build close to the existing old holt site. It is not being used at present, but the otters have been sprainting nearby on a regular basis. I wanted them to be able to find the entrances pretty easily, in a location in which they regularly visited. The bank was pretty overgrown and quite steep, but we decided to carve away too flat areas using the digger. These would form the spaces for the two chambers. Channel were also dug onto which the pipes would lie to form the interconnecting tunnel and the entrances. #gallery-20660-13 { margin: auto; } #gallery-20660-13 .gallery-item { float: left; margin-top: 10px; text-align: center; width: 50%; } #gallery-20660-13 img { border: 2px solid #cfcfcf; } #gallery-20660-13 .gallery-caption { margin-left: 0; } /* see gallery_shortcode() in wp-includes/media.php */

Once everything was in place and I was happy with the positioning, these frames were secured with stakes and then a concrete mix was used to fill them. This would then give us a solid base on which to build the chambers  and would provide a flood proof structure.

Each chamber will have an interior camera. As in my badger sett, the domed camera will be mounted on a plate and on a pole that will be lowered down a pipe, into the camber. The pipe will then be capped to ensure no rain get inside. The best place to set a camera is just above the entrance as this is likely to alowayts be clear, especially if bedding materials are bought inside.

Someone comes and makes an early inspection!

I was thrilled with how everything was starting to come together. The interconnecting tube will have a rubber insert, to allow easy access up and down as the inside of the tube is smooth. The entrances have a very low gradient on them, so this will not be necessary there. This pipe is the same gauge as used on the badger sett and we have had foxes use that as well. Although my primary aim is to get an otter to use it, of course any animal could come and check it out. I would not be surprised to see both badger and fox investigate at some point!

I returned to the site early the next morning after Ed had finished the chambers. I jumped down inside the top one, to see how it was looking. I could not believe my eyes when I looked up the first pipe. Something had beaten me to it… and those looked like otter prints! A fine layer of silt inside the pipe showed clear prints into the first chamber, then through the second pipe into the lower one and then the final tunnel down to the river. With all the tools, upheaval and disturbed soil, I could not believe that I had already had an interested visitor. I just hope it approves and returns very soon!

I could not believe that I had no Bushnells with me. I could have set some up to monitor before I returned in a week’s time to carry on. The site will be monitored by trail cameras until we get the cameras installed.

Ed had done a wonderfully neat job of making all the pointing, of the blocks, neat and tidy. I was about to wreck that! I mixed some cement, with a small amount of waterproof PVA within in it. I then started to fill in the corners and sharp edges to create a smoother interior. What I am trying to achieve is a more natural look inside these chambers, as if they have been dug out underground.  I packed this cement around the pipe entrances to disguise them a little too. #gallery-20660-17 { margin: auto; } #gallery-20660-17 .gallery-item { float: left; margin-top: 10px; text-align: center; width: 50%; } #gallery-20660-17 img { border: 2px solid #cfcfcf; } #gallery-20660-17 .gallery-caption { margin-left: 0; } /* see gallery_shortcode() in wp-includes/media.php */ 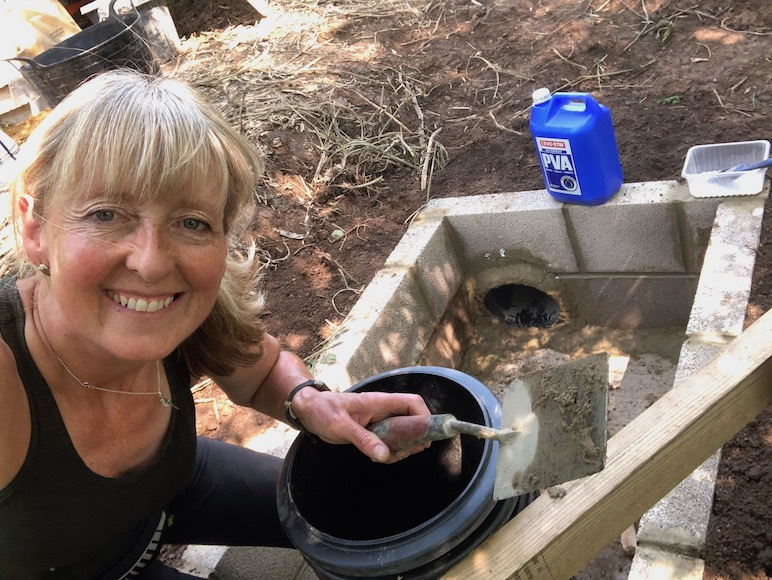 The final stage was to cut and place the slabs on top. These will then be covered in a waterproof membrane to stop rain ingress from the top.

Ventilation will be provided by the drainage pipes and entrance pipes.

In the design of this space, I had to make it as ‘future-proof’ as possible. This means that I can access the cameras and the chambers if I need to. Obviously, the cameras will show me if the chambers are being used and these will only be accessed if the chambers are empty. If they do flood, the slope and the drainage should ensure that they empty quickly. If they do need to be cleared at all, I will be able to access them by removing the half slab on top.

The next stage is to get the cameras inside. This will take a little time as the wiring infrastructure is now being installed and then the cameras will need to be set up. They will be waterproof dome IP cameras capable of filming inside the chamber. They can be focused via the PC. Infrared views should give me a clear black and white image inside the chamber so I can film any visitors. The cameras are then connected to a central PC with iCatcher console, which monitors and records 24-7.

Lockdown Podcasts with Ryan and Jack